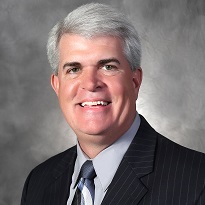 Paul Johns has been with the Orlando Health system since 2003 and has served in his current role as Chief Operating Officer of Orlando Health South Lake Hospital since 2012. He is responsible for operational strategies and oversight of all ancillary services at the 160-acre campus, which includes 170 patient beds, an ambulatory surgery center, a short-term rehabilitation facility, the National Training Center and other pre- and post-acute healthcare services. Johns was previously the Administrator of Ancillary and Support Services at Orlando Health Dr. P. Phillips Hospital, in Orlando.

Johns has extensive experience in operations and leadership in the healthcare industry and has been instrumental in helping to lead several growth initiatives at South Lake Hospital. Current projects include an emergency department expansion on the main campus and the addition of two new campuses in the hospital’s service area that will provide improved access to care for the growing resident population. Johns’ initial focus with the Orlando Health system in 2003 was as Director of Rehabilitation at Orlando Health Dr. P. Phillips Hospital Brain Injury Recovery Center. His expertise in planning, leading and evaluating service lines led him to several other administrative positions within in the Orlando Health organization before joining South Lake Hospital.

Prior to his work with Orlando Health, Johns spent eight years with Leesburg Regional Medical Center, Leesburg, Fla., and held several positions including vice president. The Lake County resident received his MBA from Webster University, Orlando, and his Bachelor of Professional Studies from SUNY College at Brockport, Brockport, N.Y.